Anyone have any thoughts on the Coronavirus? How are you all responding to it? What do you think's gonna happen next?

I can't quite tell how seriously to take it. At first I thought everyone was overreacting, but now I think it's a bit more serious. The good news is that most people seem to recover fine. Some barely even have any symptoms, so it's probably not much different to seasonal flu in that regard. The death rate may be a little higher than flu, but I doubt it's 3.4% cause many people probably don't report it. But the bad news is that it seems to be highly contagious, so I think the numbers may well keep rising for quite a while yet, which means a lot of people are gonna die from this.

I'm wondering what the right response to this should be, individually and nationwide. Nationwide, if a whole country shuts down it could slow the spread. But it could also cripple the country economically which could also lead to more deaths, if you play it all out, i.e. less money for social welfare. So maybe it's about striking a balance, just restricting the less vital causes for social gathering, but keeping food stores and hospitals open. And individually, it's similar; if I lock myself away from the world I'd probably be safer. But is that really the right way to live? How much should we let these things cower us and stop us from living?

I'm already a 90% shut-in, so it's not really cramping my style too much. I worry about my grandpa who's almost 90 and catches colds easily, though.

I had the flu two weeks ago already, so that concerns me, since I feel like the tracks have already been laid for me to get sick again. I'm just being very mindful to not touch my face in public and I'm also using Purell constantly and just washing my hands more.

I'm just gonna lay low until this stuff subsides, a little discomfort is a small price to pay to keep from transmitting and contracting a potentially serious virus.

FountainandFairfax said:
I'm already a 90% shut-in, so it's not really cramping my style too much. I worry about my grandpa who's almost 90 and catches colds easily, though.
Click to expand...

Same here. Though, I’m worried about my mother who hasn’t been feeling too well lately. But that said, my oldest sister has said she’ll be getting the shopping in the meantime. I do think the panic buying of hand sanitizer and toilet paper is really excessive and an overreaction.
Last edited: Mar 13, 2020

FountainandFairfax said:
I'm just being very mindful to not touch my face in public and I'm also using Purell constantly and just washing my hands more.
Click to expand...

Yea I'm trying to be extra mindful of not touching my face - especially when out in public. I get home and wash my hands with disinfectant soap immediately. Whether its going to the gym, supermarkets, handling money or work, I'm much more careful now.

I've been stocking up on pudding.

PugofCrydee said:
Yea I'm trying to be extra mindful of not touching my face - especially when out in public. I get home and wash my hands with disinfectant soap immediately. Whether its going to the gym, supermarkets, handling money or work, I'm much more careful now.
Click to expand...

I've quit even going to the gym, way too many germs right now.

I'm only worried about it for the elderly and immuno-compromised. I think it deserves action and attention, but I seriously believe the media has blown this WAY out of proportion. The city I work in is quite the epicenter for lots of travel-abroad students and workers, so I feel I'm definitely at a little bit of a risk to contract it, not sure about actually getting sick from it. I do worry a little though, as I am currently going through a bit of immune trouble myself (rather an over-active immune system). The best thing I and anyone can do is have a healthy diet (eat those veggies!), pay attention to your immune system, and wash. your. damn. hands! Use some sanitizer here and there but don't use it as a substitute for actually staying clean.

There's no need to hoard necessary supplies and leave everyone else - especially those in need - unable to get supplies necessary for themselves and/or their families. A lot of the stores where I live and the surrounding areas are completely out of stock on TP, diapers, baby formulas, tissues, paper towels, hand soap, and sanitizer. It's getting ridiculous. I'm just glad I did my shopping a few weeks ago before the craziness started and don't need any of my necessary items.

It's a strange kind of threat, it's invisible, so it's hard for people to know quite how to respond appropriately.

My feeling is that I think the numbers are about to skyrocket. It's highly contagious and spreading exponentially, and with a vaccine years away, most of us will contract this virus at some point in the next year or two. The only thing we can really influence is the timing. The graph below I think shows it well. If it spreads too quick then our health systems will be overwhelmed and many more will die who could otherwise have been saved. So I think the more each of us can self-isolate and wash hands etc, the more chance we have at delaying the spread which will save lives.

It's sad though. It's like an unstoppable dragon sweeping over the planet and picking off all the most vulnerable people. This time next month I think the world will have a very sombre feel about it. 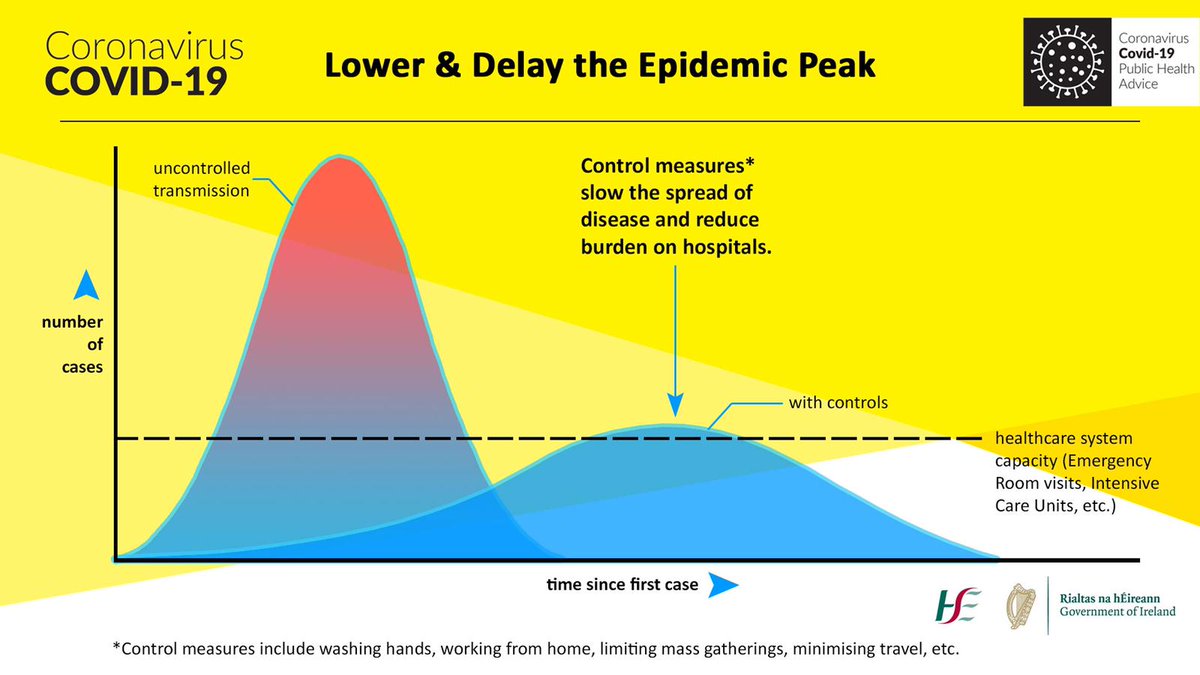 I'm not worried about myself, as I stay in most of the time, live in a rural area with more trees around then people, and am able to make by with ease if worse comes to worst as I have never struggled to go without if need be (or if going without enabled the good old AvPD)

But I can't ignore how it's been escalating, at least here in the USA. Over the last couple days every major pro sporting league over here has suspended their seasons indefinitely, and college sports are cancelling all their events as well, including the ever-popular March Madness tournament. Those things alone are unprecedented. I know it's just sports, but it's crazy to think about. Outside of strikes, sports league don't just collectively stop for extended periods of time for any reason. Baseball went on during the world wars. I think New York sports teams were back in action a week after 9/11. Something has to be a really big deal for all sports to just stop altogether.

I'm not sure if its just the world acting with an abundance of caution (which I'd be okay with) or if things are going to get worse on a level we've never seen before. I personally don't think it's the latter, but I'm at least going to keep it in mind as I like to live by the adage "Hope for the best, plan for the worst".

Im lowkey hoping the precaution measures get schools and more specifically my uni closed down. I'd much rather do the semester online instead of the damned classes

On a more serious note, I also thought people were overreacting at first and am unsure now. Im pretty hermit-ish so I should be fine, but I also have a rather crappy immune system and get sick very easily. So if I do get exposed I could easily catch it, and given my asthma/respiratory issues it could be very rough going.

A bigger issue for me right now though, is definitely the people who are hoarding resources. Other people need access to hygeine products and such to minimize spread. Assholes need to stop buying up coz some of us need to buy toilet paper, or soaps, or medication, etc. Its annoying as hell.

FountainandFairfax said:
I've quit even going to the gym, way too many germs right now.
Click to expand...

stealing this as my excuse for never going to a gym

LoyalXenite said:
stealing this as my excuse for never going to a gym
Click to expand...

I agree, it's a very germy place. I always wash my hands when I leave regardless. 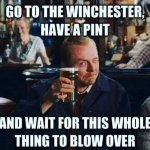 I think most of us introverts feel like we've been training all our lives for this type of situation. Give me enough food, internet access, TV and a few books and I'm fine.

I have to admit, at the beginning I was kind of blowing the whole situation off but it does seem to be quite serious so I'm taking the necessary precautions whenever I can but I don't want to live my life in fear, afraid of every little risk. The other day I was at the library and there was a guy at the table next to me who sounded like he was having trouble breathing then he started coughing. I probably should have moved but I continued what I was doing until he thankfully, left. Then other people started coughing so I finally left. I guess just stay away from anyone who seems to be ill Today, I saw an old co-worker and reflexively shook his hand. I thought about it afterward and immediately washed my hands when I got back to my office. I guess things like that are going to become the norm until a vaccination is produced to fight this thing.

Just been to the supermarkets to get a few groceries. Half the shelves are empty because of these idiots panic buying.. 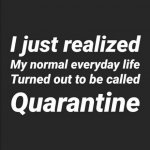 Just got the first confirmed case in my county.

PugofCrydee said:
Just been to the supermarkets to get a few groceries. Half the shelves are empty because of these idiots panic buying..
Click to expand...

Its so frustrating, I cant afford to stock up, I buy weekly/fortnightly and so whenever I go in I cant get what I need. I was lucky enough to get some shampoo/soap/deodorant (three separate items not one all in one item ) but pretty much every other thing I needed homewise was gone.. Foodwise wasnt much better. At least I got some dog food though.
You must log in or register to reply here.
Share:
Facebook Twitter Reddit Pinterest Tumblr WhatsApp Email Link
Top