MollyBeGood said:
Kitty is getting HUGE I barley recognize her!!! View attachment 5566
Click to expand...

in a VAN down by the RIVER

A pic of Gus from our walk this morning. 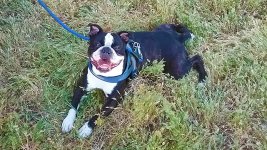 He looks healthy and happy! 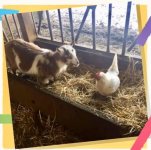 So sorry for your loss

I finally adopted another kitty today. It's been a long time coming. I originally wanted to at the end of last summer, but kitten season was over and a part of me still couldn't bring myself to do it yet either. Now I've been waiting this season to adopt and actually got a little boy to add to the fur-family. This is Sterling. Pic isn't mine, but wanted to share it because of that cute little derpface.

(Side note: I chose to adopt a kitten vs adult because my Venus is quite the sassypants and I honestly didn't think she'd take well to an adult. She did well with Thalia when she was a kitten and only had mild spats as Thalia got older. They became quite the pair after some time and was devastated when she lost her. Now I'm kind of hoping for the same again with this guy!)

Sterling sat still just long enough this morning for me to take his pic before he went zooming off to play again.

Phoenixx said:
Sterling sat still just long enough this morning for me to take his pic before he went zooming off to play again.

He’s such a cutie congrats on your new fur baby!

This sweet girl kitty has been hunting the farm grounds lately out of nowhere and showing up at the door. I adore her.. 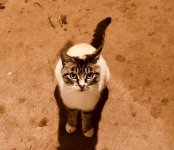 Why is this sideways? Her new favorite spot is the counter tops OH my 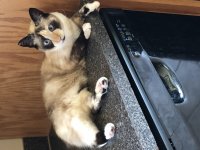 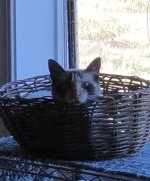