anyone rich and still lonley?

#241
If you're looking for sincerely caring relationships, I don't see how money could help...
R

Basically money just get you the things and tools you need. About people money can briefly purchase places to go, parties to have and events to hold. That is all what money can really do at all.

I understand these things. I want my bachelors pad; my house; but I also want to mingle with social-able people. So in terms of what you really want to do and why you want to interact with people that is what money does at all.

It makes things easier because you can say. Lets go to this place for no apparent reason or lets go to that place for whatever. Lets meet up and then do this and do that. That is what a job is for.

People with money if any are not happy because they want to do things but do not have the respect. Their line of thinking is only a sum of people.

Bottom-line you need to have money to do the things you want to do; in order to have people around you. However their is something called friends as well. Friends do not need money. Friends are people who are just people who you can associate with even if your dirt broke.

People that you do things with and cry on are called friends. I know the pain of things. People who want to be your friend and you do not have things to say to them. It is hard to make friends in my opinion especially when your with kinds of people in the world itself.

Then their are people who categorize people and do not want anything to do with them at all.

#243
hugh hefner isn't exactly pissed off with the deal he is getting when it comes to the women, he knows they all sleep with him for his wealth, but do you think he really cares? really!?
B

#245
Wait, but what are you missing from this equation? 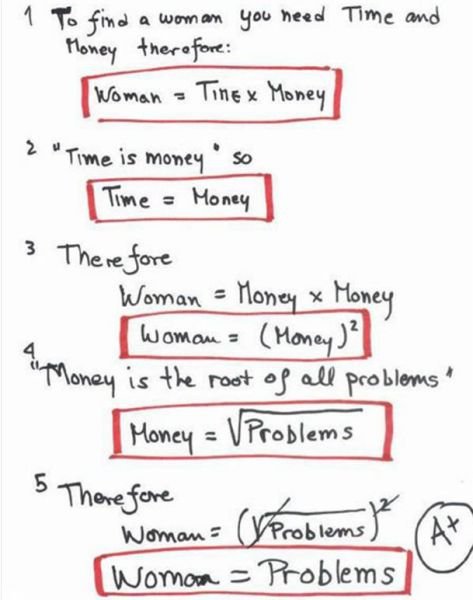 #246
Money could lessen your problem, but it could also be the problem.
But it's better to have more money, just manage it well.

#247
no but it's definitely better than poor and still lonely!
R

#248
By rich it is to invest in various products and services. The reality is that many women from even age 17 ( or some in High school equivalent ) does not want an man for his the words that comes out of his mouth, or even by him romancing or talking with her, or being sexual with her.

Women have an biological clock, which means there eggs could drop, their breast could drop, their skin could stop looking nice, and so forth. Women from other nations where money is hard to make normally would like an man to be able to deal with her flying back and forth and even flying her family in and such. Women also want the best for their parents because somebody has to take care of you, and not every place have medicaid, or medicare type public funded services.

To make things worst many men are afraid of "good looking" or "young looking" women because they have issues. In fact what I find funny is that some race groups are unable maintain their health then others. By this lets say an person from White-A is different from White-B, or even White-D. Know that it is biased but eventually loving somebody and being intimate with them you will discover the problems of hygienically care. Some if not many women invest a lot of money into hygienically care that is above normal standards.

First it is about getting along ( speaking without religious ideas ) having great sex. The funny stupid people.

Then it is about physical appearance. The girl looking at the Jock who might be an COO in later years.

Finally is about who can bring home the bacon. The guy who went to Science school.

Think about things like that. Speaking of people with investments. An man in Texas recently would invite people over for an price to swing between each other. He converted his normal sized home ( an house with decent 1940 ) yard into an paradise. The problem is that it is an gated community and they do not want people running business from it.


The truth about women in later life is that like an job THEY WANT YOU WHEN YOU DO NOT NEED THEM. That is the truth. Like right now your worth ( I am ) paintchips while another man who has been on this planet with an decent job and decent wealth is worth sliver. Another man who is barely alive is worth platinum gold.

Look at all the Disney garbage. They have these princes who live in the castle and then comes along Cinderella and her pugly sisters all chasing the prince down. You think the prince want any of those beasts. Maybe one of certain kinds of tastes I will admit. But in the end she gets the princes and they get to work in the castle as servants.

Who is going to provide. Who is going to protect the family??? Imagine an 12 year old couple who have just had children ( which happen recently but is not new news ) In logic that household would need an mid-wife, an matron, and an reasonable amount of wealth. That is parents getting involved. The bread-winner being sent off to learn something that is worthwhile.

Imagine two broke as an joke 40 year olds who failed to accomplish their goals. The woman can barely give birth. They are not in peak condition at all.

Imagine an 41 year old with an 14 year old ( just for argumentation sake )....One is an retired from military and police duty, owns an house, and is starting an business. The other only knows how to cook and dress dolls.
I mean what moments are special then the moments between two people. You mean what society tells us is normal????

Imagine myself. I have my DREAMS, my GOALS, and my materialistic wants. I am going to sacrifice those things for who???? I am broke as an joke, and I want somebody to be with that matches me. However I want the best. Where do I go? Who am I? Who am I?

You have to understand that some people both men and women wants people THAT DO NOT NEED THEM. Sometimes you meet an person you want to be with and then you meet other people you want to be with. But things do not connect. That is the next step in life, making an big mistake and dealing with that mistake, towards your goals.

Not sitting on our behinds watching other people enjoy their lives. Take reality television or stuff from the voids of the internet. Don't you ever say. Why not I? Why be the watching getting radiation damage from your display or tele, and be the person you know you are meant to be. I am not saying to envy or covert other people. I am saying to go out their and be that person you know you are.

Like take the Mask ( Stanley Ipcus ). In fact the "Mask" sums up life back in the 1990's. Because that is how peaceful life was.